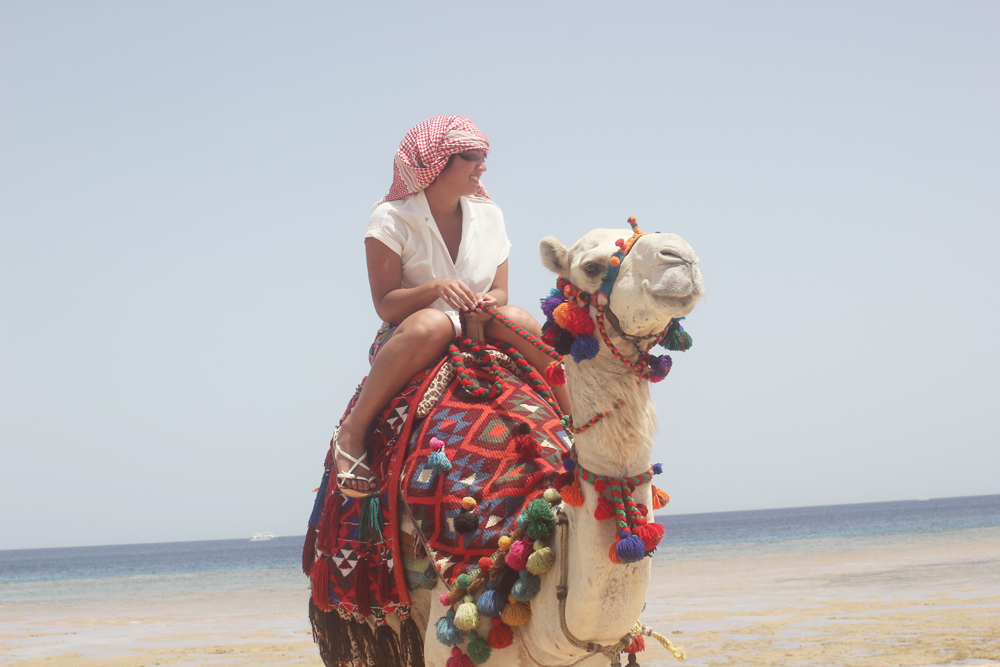 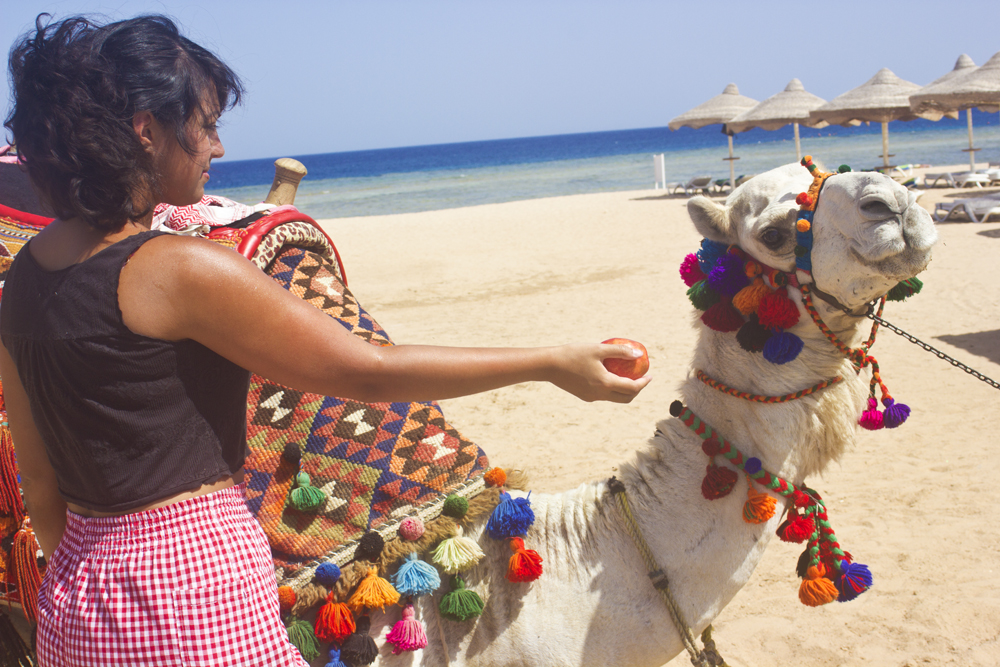 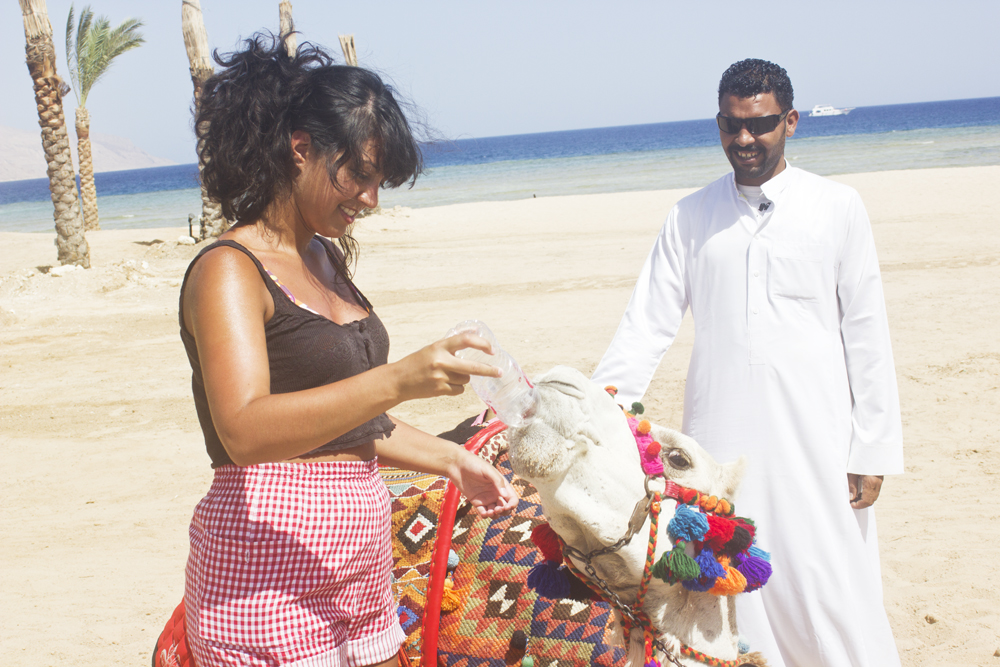 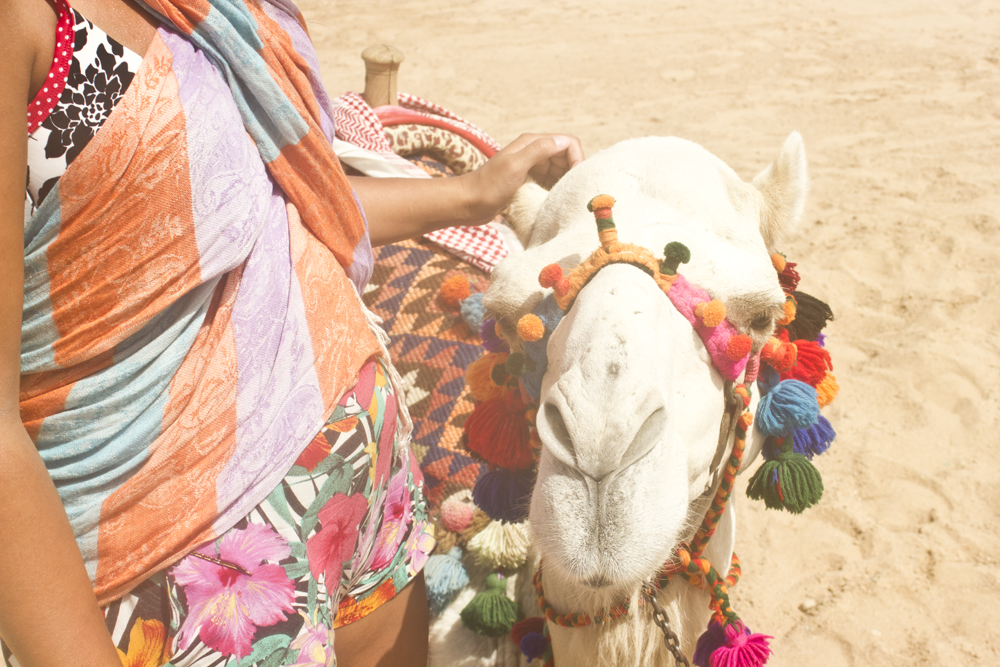 This beautiful 7 year old white camel named Casanova (he certainly stole my heart) had a pitch at the end of our hotel grounds so we met him on our first day. I assumed the camel was in a dire situation much like British seaside donkeys, and as I’m pretty militant about animal rights I immediately started questioning the camel driver: where did the camel sleep and eat? How old was he? Where was his herd? Camels like to sleep and rest together with their herds, and they also like sleeping in the same place. I wanted to make sure this camel was happy.

The camel driver explained that the whole camel family worked at various hotels up and down the beach and assured me they were all reunited nightly at a central compound (where they were also fed). He could easily have been lying to appease the crazy tourist but it later turned out my hotel room was overlooking the camel compound. The hotel apologised for the less-than-scenic view but I couldn’t have been happier. I got to see for myself that the camel driver was right, there were about 16 happy camels sleeping in circles and eating together.

On our next journey to see Casanova we met his owner and whilst chatting he showed us a pretty amazing photograph; the only photograph he had of his grandparents which showed them alongside about 4 camels; ancestors of Casanova. He explained that the family have owned camels for many years. I was starting to trust these guys and after seeing some sorry-looking camels in the local markets or towns I could see that Casanova was in good health.

The hotel residents are encouraged to bring Casanova fruit and water, give him treats and play with him. We definitely weren’t the only people who took him food on a daily basis; there was one occasion where we turned up and he refused to eat any of our food. The owner explained that a lot of people had already come bearing treats and he was full. I remember thinking for an animal to refuse food and water in the middle of such blazing heat must have meant he was pretty content. 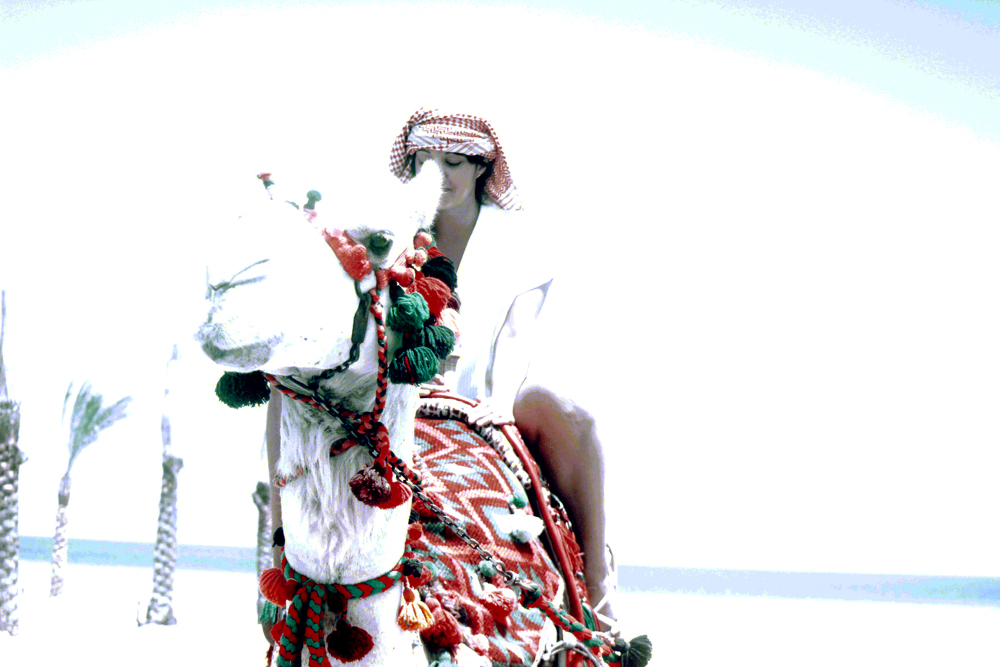 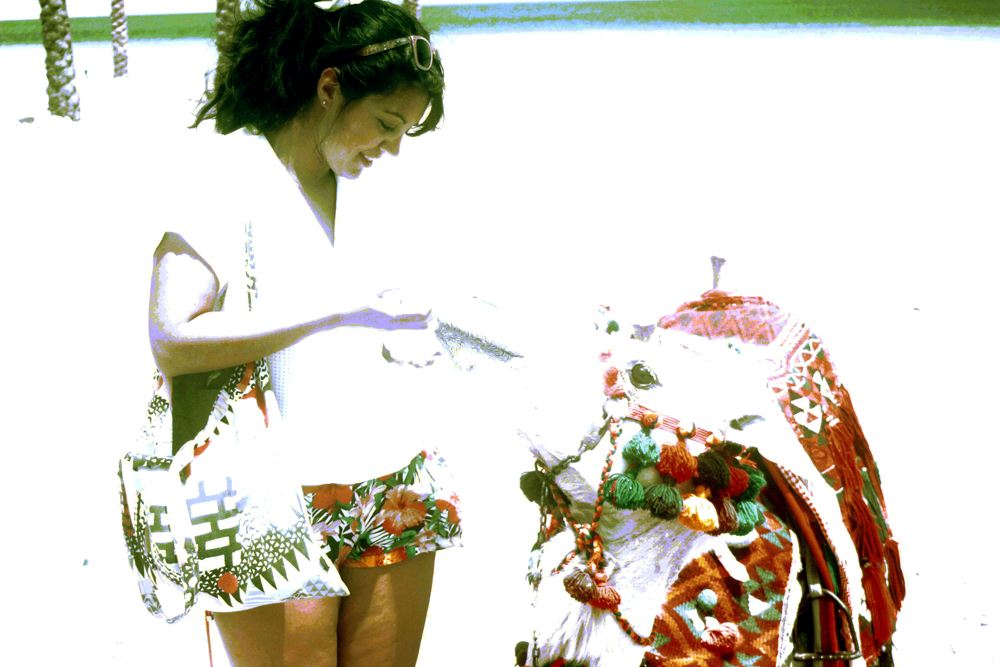 Camels have been domesticated for at least 4,000 years and there are depictions of camels helping humans in ancient cave markings, predating all written accounts. They have been worshipped in poetry and songs by the Arabic people since ancient times and prized as highly-regarded friends. Camels are patient, good-natured and co-operative which means they are better suited to working with humans unlike (for example) horses, who have to be frightened into doing things, or monkeys, who are taught via starvation. Camels often show affection to humans they like and respect; there are reports of camels protecting and helping their Bedouin owners in desert sandstorms (dogs, elephants and occasionally dolphins are the only other animals who actively look after humans).

The camel driver showed us what to look for in a happy and healthy camel, such as the skin on his eyelids and thick the fur is round his ears. All this considered I felt a lot happier about the situation. Last year on holiday I spoke about my distress at donkeys and camels being used as a tourist attraction (aside: I need some new shorts…), but having studied camels a bit more and seen this particular camel, his living situation and just generally learning more about these animals, I decided he had a happy life and it would be ok to go for the camel ride.

Casanova started running as soon as I was on him; apparently this was partly because I’m small and he was seeing how fast he could go with me on him, and partly his way of playing with me (he’d got to know me quite well after 5 days of treats and attention). We ended up going quite far out into the sea where Casanova ignored his owners calls and we waded around for a good ten minutes. It made me think of when boys give you piggybacks and the first thing they do is try and run around and pretend to drop you (boys will be boys, regardless of species…).

Aged 5 I fell asleep on a very long camel trek in Kenya and it actually felt very reassuring to be on a camel again, the familiar rhythm of the camels legs is one of my oldest memories. Every once in a while you meet somebody on holiday who changes your opinion on things and makes you reconsider things. Crazy as it sounds I guess in my case, that somebody was a camel… 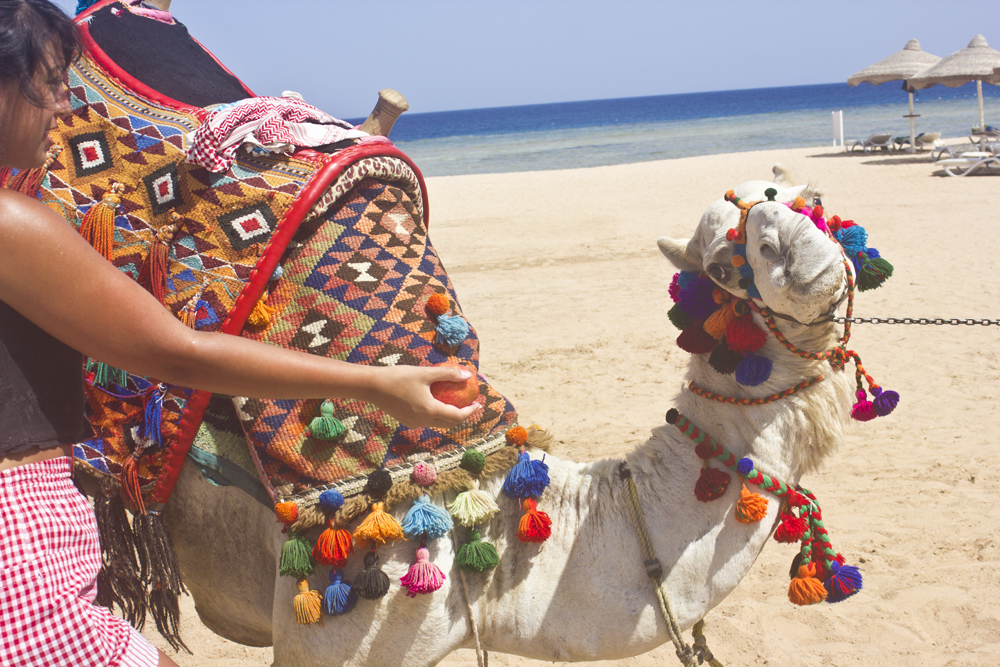 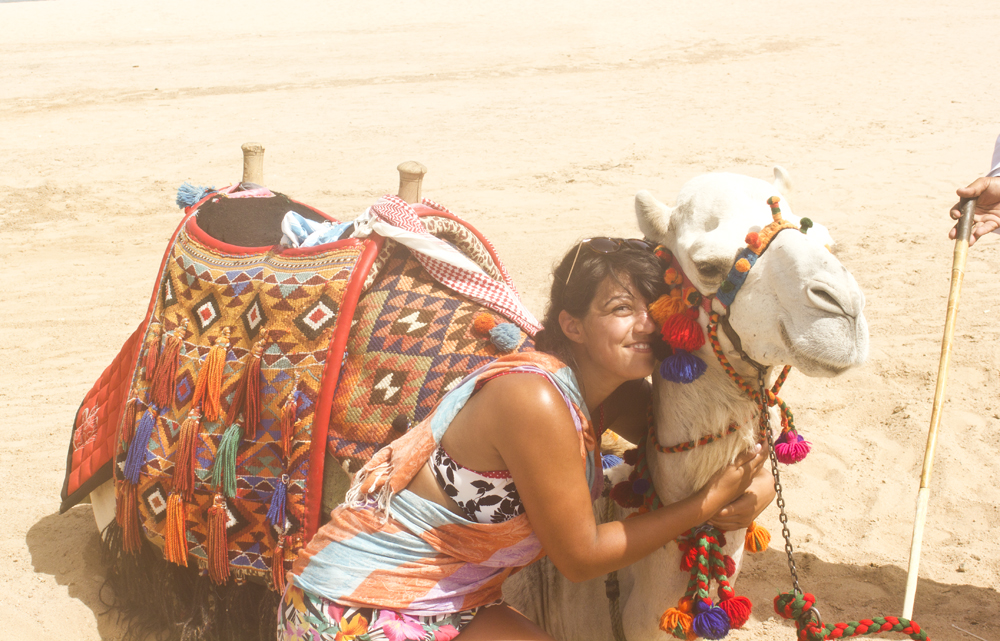 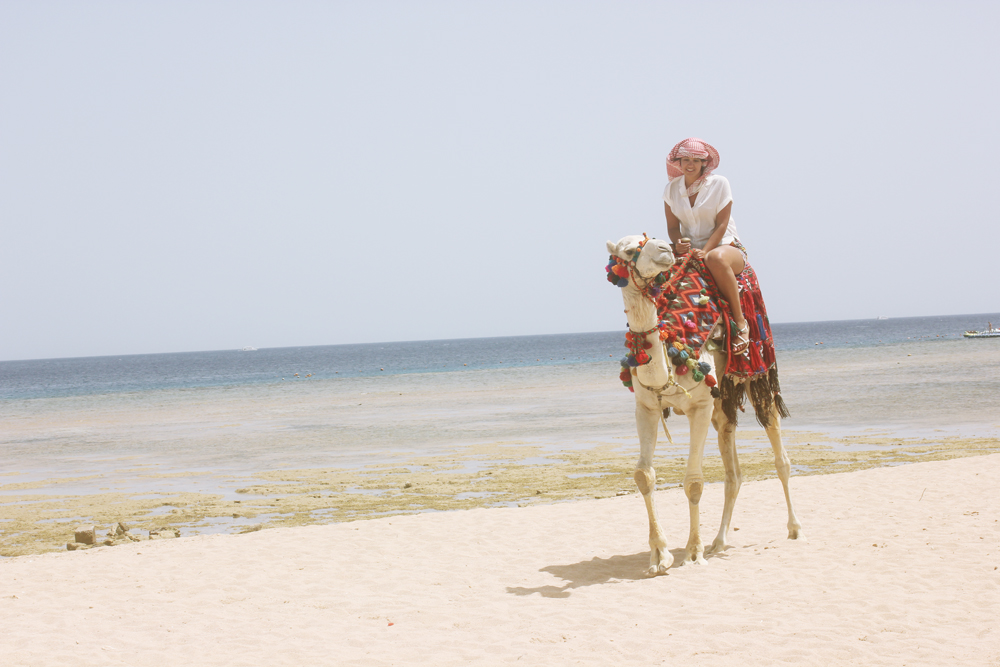