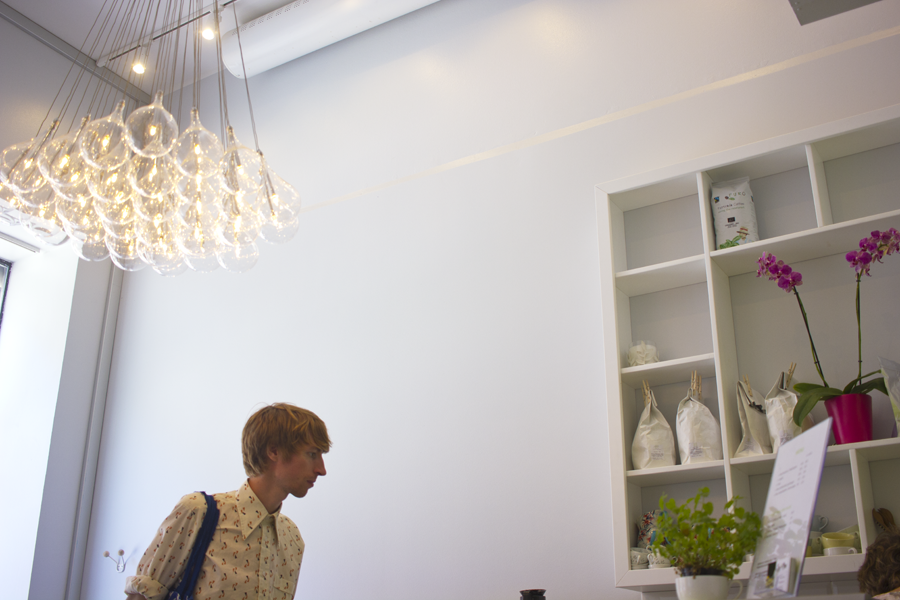 Hello! Welcome to my vegan guide to Helsinki. We were absolutely spoiled for choice in Helsinki – I could have stayed another week and not seen everywhere. I’d honestly put it up there with Texas and Berlin as “vegan tourism” destinations, that’s how plentiful it was!

I thought as well as including the places I visited, I’d also tell you about the couple of places where we ran into problems. We visited August 2016 so work out how up to date this guide is when you read! Also, I’ve asked Ryan to give a quick line on each place just so you can have a slightly broader vegan opinion on each one. Feast your eyes on the below!

We absolutely fell in love with this place. I was excited to visit this bar in particular as I looked them up online before going and was able to read their whole incredible menu (here) in English! They are super welcoming to tourists. The bar itself is great – excellent beers, band pictures, cute decorations, ritzy red vinyl booths. Definitely visit! The food is super filling but make sure you also try the James Brownie dessert at least once.

Ryan: Greasy food without the grease and really chilled atmosphere. If I open a bar it will be like that place. 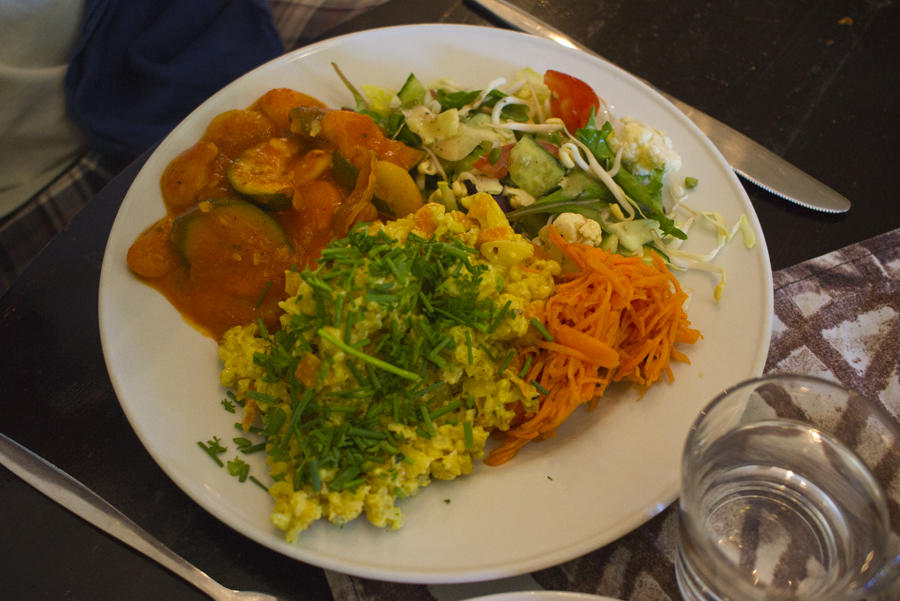 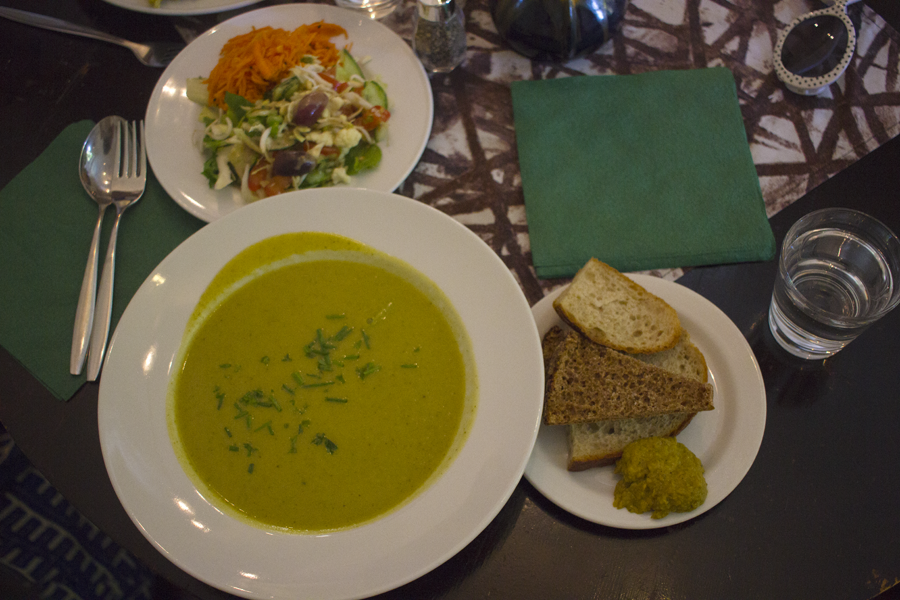 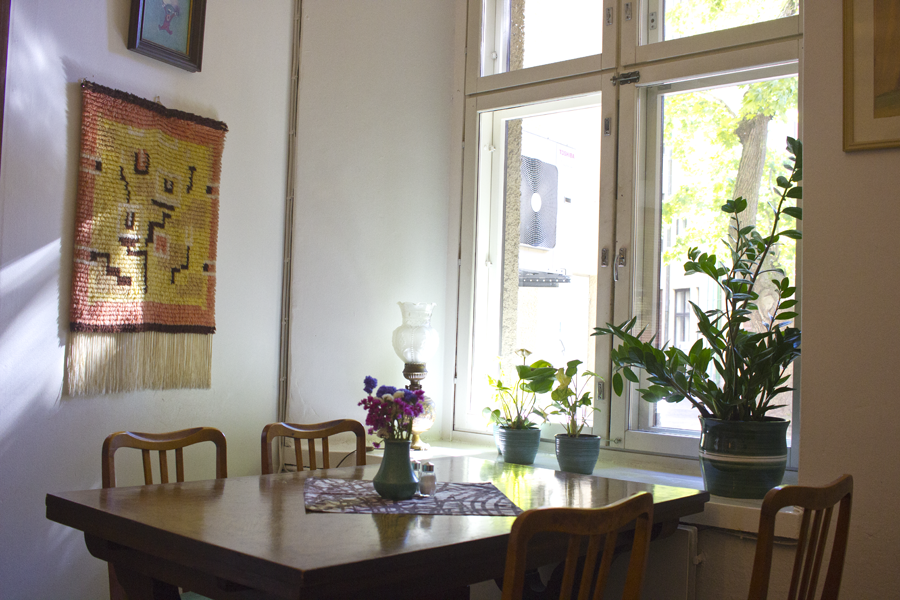 Short walk away from Esplanadi park. I can’t recommend this place highly enough for lunch – a gorgeous little place with great vegan options cooked fresh daily. The portions are massive and excellent value for money. We stopped in here after a busy morning sight-seeing and it was a moment of calm.

Pizza place with great (if expensive) beer. They had a couple of vegetarian options and just the one vegan option when we went, but honestly it was so good that was enough. We were both stuffed without any sides or starters so bear that in mind. This was probably one of the more expensive places we went.

Down the road from the pizza place, so if one’s full try the other. We ended up going here twice (despite trying to enforce a no-repeats rule in order to get round everywhere) because it was so near our house and had so much choice! We had to wait both times – it’s a hit with the locals, but 20 minutes at the bar was fine. Vegan versions of Finnish dishes, plus great Asian food in this cool little bar.

Ryan: It was so nice to be able to try Finnish food!!!

Over in the hip Kallio district, I think this was my favourite meal. Soi Soi had a cool, laidback vibe and the food was prepared super fast and great value for money. I had a seitan doner kebab and it’s probably one of the best vegan meats I’ve ever tried. Ryan went for a burger and we split sweet potato fries (again, massive portion of fries here). Also, they stock some great drinks including my fave Fritz-Cola! The menu is written on a board in Finnish and Swedish but one of the lovely staff translated the whole thing out loud for us. 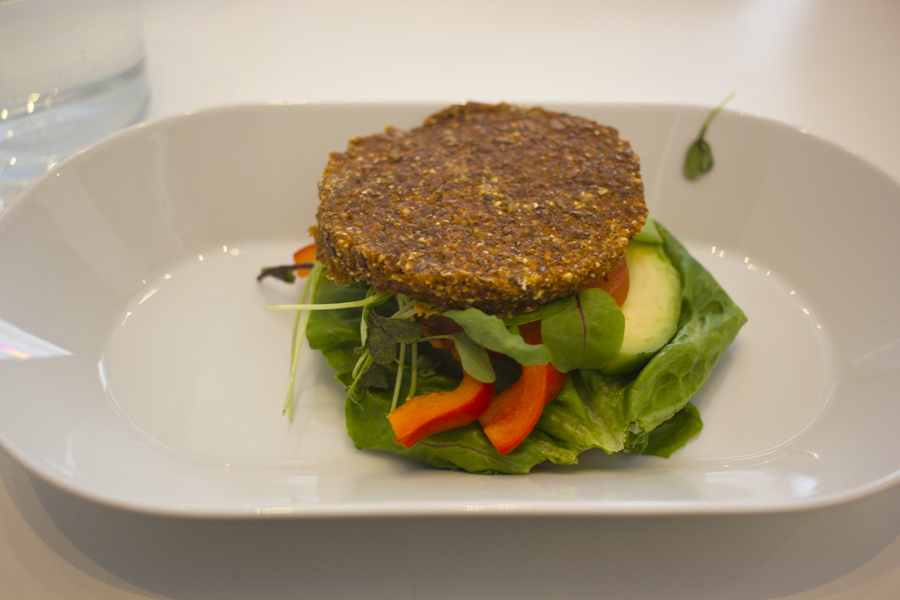 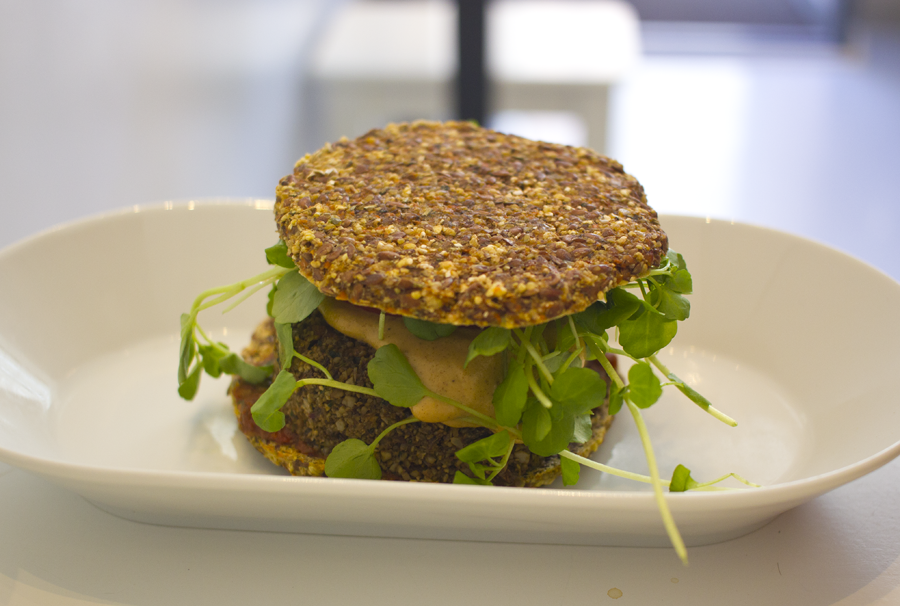 Raw vegan cafe great for a lunch spot, or coffee and treats. We had a pleasant lunch meal here – I went for a vegetable sandwich made with carrot bread and Ryan had a burger (noticing a theme?). This was the only meal that didn’t fill Ryan up completely (he got hungry about an hour after), although we should also bear in mind needs 4100 calories a day (wish that was an overexaggeration but it’s not). They had a great chocolate and cake selection here as well – the chocolate caramel bar was one of the nicest vegan treat I’ve tried in all my 7 vegan years.

Ryan: …oh yeah…. I didn’t really like it. It wasn’t not tasty, it just…wasn’t really for me. It was the first time I’d tried raw vegan food and… I don’t know, I’m not sure if it’s for me personally. But it was a very nice cafe and the lady there was really sweet.* 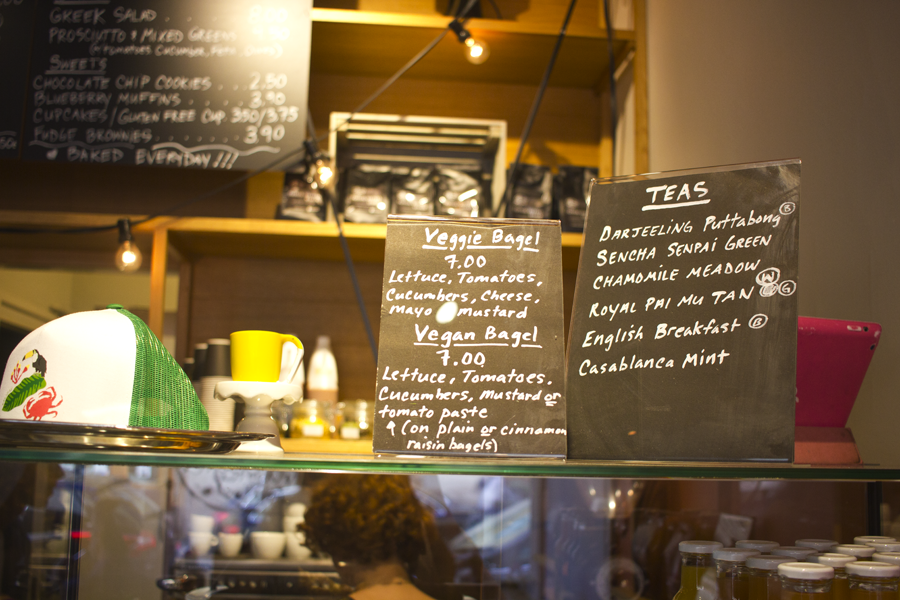 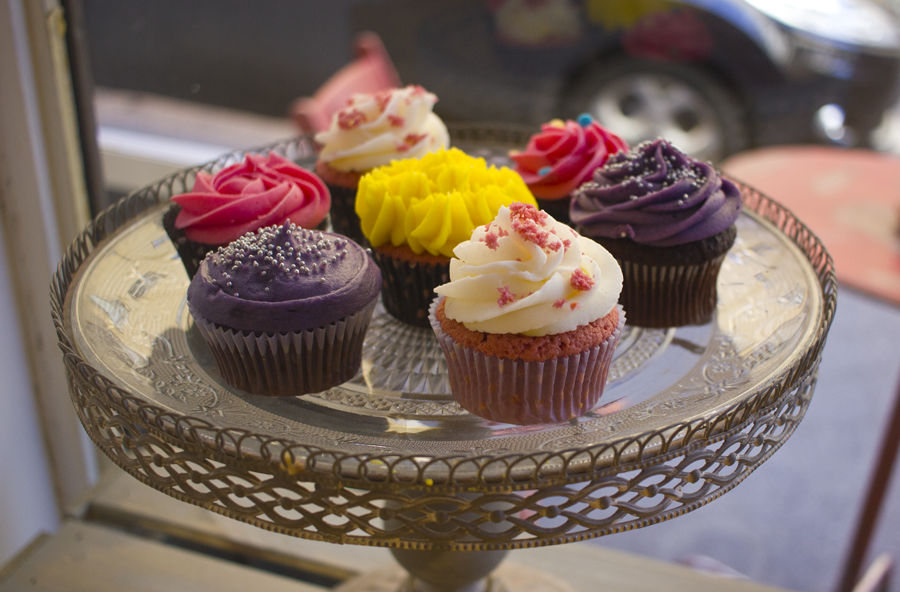 We just ran in here one day to get a coffee and came out with three vegan pastries, as you do. I’m including it because they had a vegan breakfast bagel as well which I would have liked to have tried, and it was possibly my favourite coffee out of the trip – which is saying something, as the whole trip was like a coffee awakening.

Ryan: Coffee place? I don’t know. I like coffee. Just make up a quote about coffee? 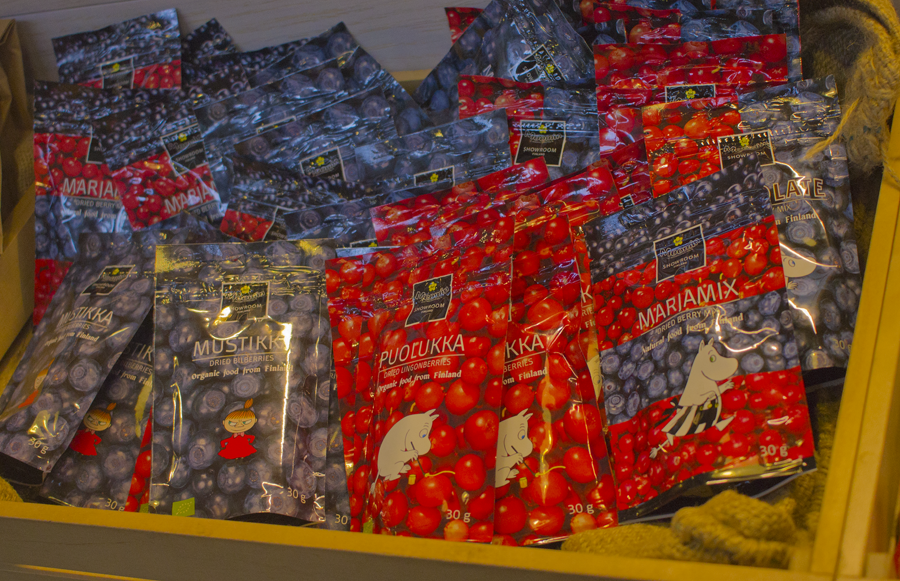 Everywhere we bought hot drinks from offered us almond or oat milk (the Finns really like Oatly, a Swedish brand – which is great, as that’s also my favourite oat milk on the market) so even if you find yourself stuck you can get a vegan coffee or tea from literally anywhere.

Supermarkets are about average price to London, and none of the ones we went in had a dedicated vegan section but many have a salad buffet area, so if you’re planning to eat vegan at home then you’ll be fine. Although I highly recommend upping your food budget and eating out all the time (which is what we did!).

A few places we found problems with:

Etelaranta – Story Cafe: this is inside the Market Hall and I’d marked this down as a vegan cafe. It’s a picturesque little place but every time we went we found great vegetarian options and nothing vegan – we asked the staff and apparently their veggie options are sometimes vegan by coincidence but it’s not something they specifically offer. Bear that in mind!

Kippo and Cafe Kippo Oy: I had these down as two seperate places but I think they’re actually one place inside the Forum shopping centre, rather than two stand-alone cafes. Didn’t get round to trying.

Jamaica Sunshine, Vegemesta, OmNam Oy, Kitty’s Public House: With all 4 of those places, either they no longer exist, or the listed address is totally wrong – with all 4 we found the roads but couldn’t locate the actual place. Or maybe they’re just hidden away somewhere?

SOUP: Up the road from the Raw n’More cafe – this place looked super nice but it’s opening hours are 11am-3pm so we missed it! If you want to try then bear that in mind.

A few places to try:

Just Vege (burger/diner bar) and Roots (yoga cafe) on Vaasankatu. We were out for dinner in Kallio and opted for Soi Soi (on the same road) as it seemed to have the most choice but had we more time then we would have returned to try both those places!

We also had excellent vegan burgers from a stall in the Kauppatori Market Square – literally grilled tofu with all the trimmings, only 10 euros with a massive portion of chips. If you’re cold and hungry then I highly recommend!

So there you go! I’ve no doubt there are loads more amazing places we didn’t get to try so please leave suggestions in the comments. Happy eating!

*Ryan trying really hard to be positive there.

How To Spend A Christmas In Oxford

9 responses to “Vegan Helsinki: A Vegan Guide to Helsinki”