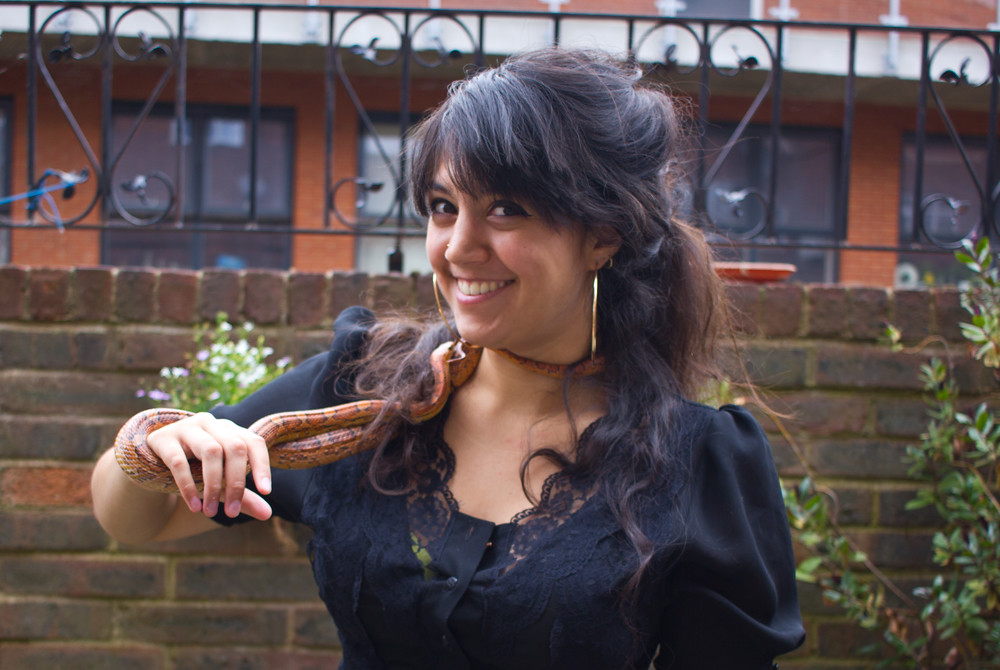 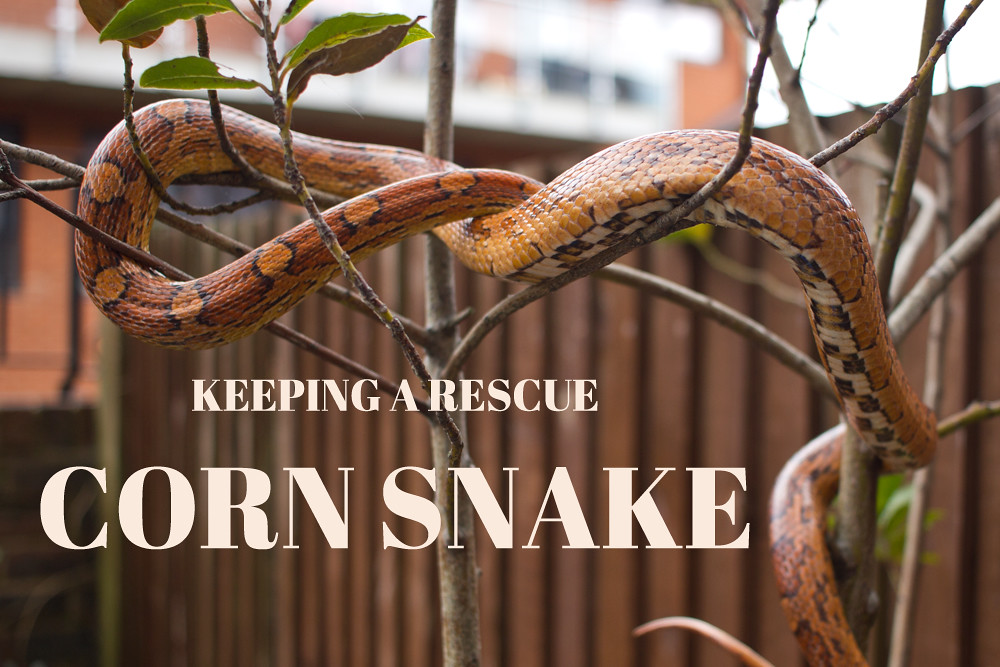 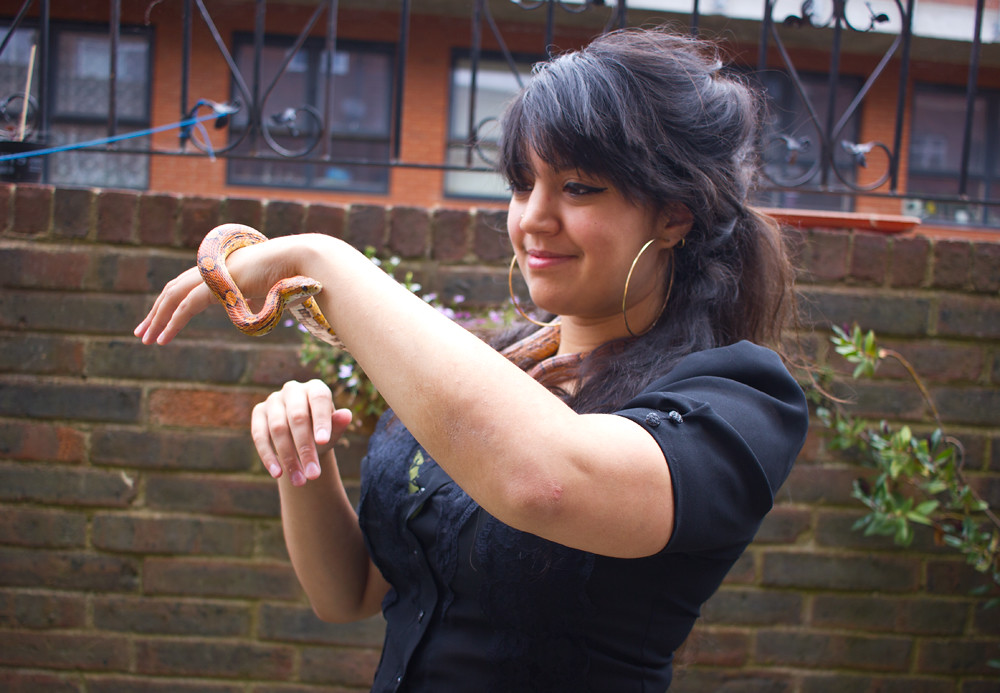 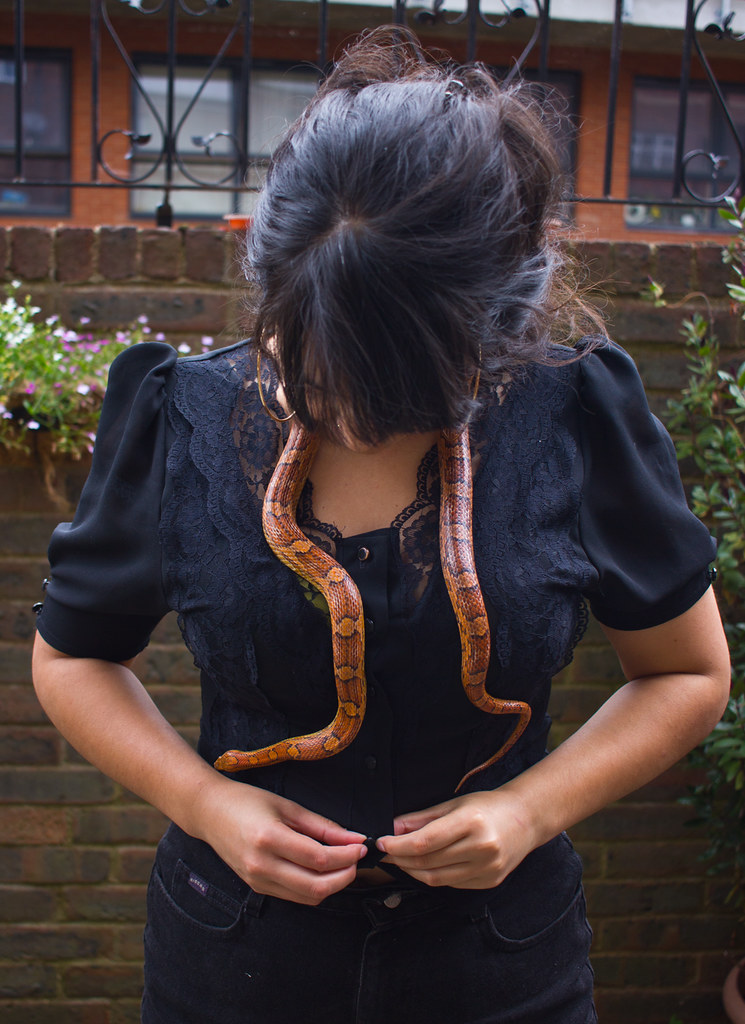 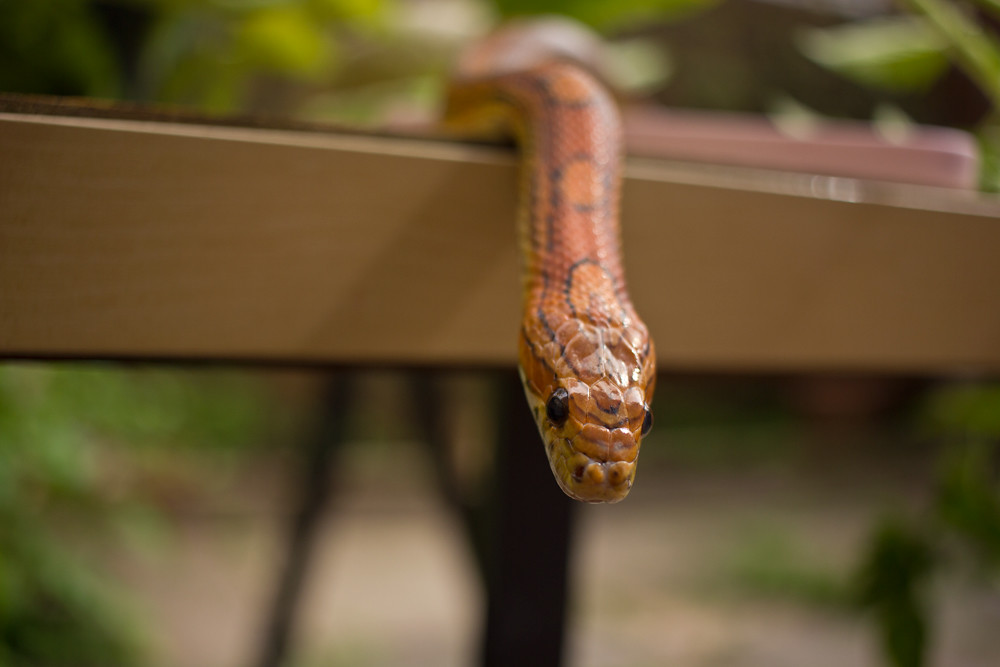 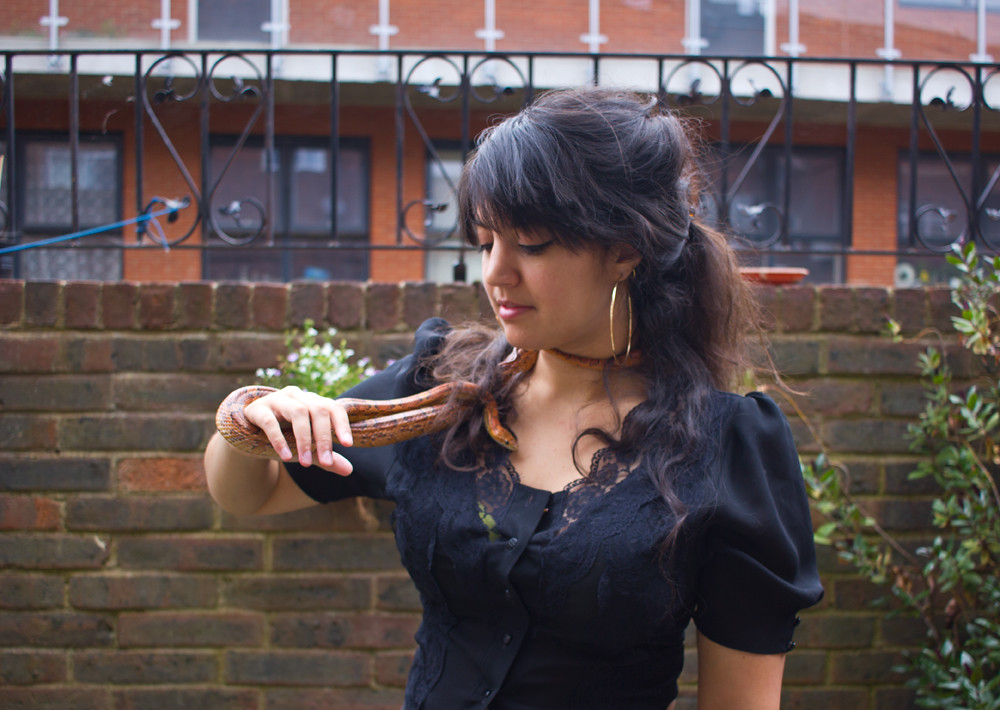 Happy World Snake Day! I thought I’d take this opportunity to introduce you all properly to our newest member of the family: our rescue snake. Meet Princess Margaret Alaska Islington, aka Maggie. As a small disclaimer, PLEASE do NOT think I am encouraging you to go out and buy a pet snake! I really struggle with the idea of animals as property. Rescuing unwanted animals is a bit different and I thought I’d share Maggie’s story today.

Let’s start with her tragic backstory. Princess Maggie previously lived in a noisy rehearsal studios in South London. Her tank was kept in a dark, windowless room. Her previous owners had found the novelty of owning a snake had worn off and so she was relegated to the studios and basically forgotten about. Mags was fed once a month and judging from the state of her tank when we got her, cleaned even less then that. She also had no light or heat mat – both essential for snakes to stay healthy. Total squalor basically – we were amazed that she was mostly healthy when we got her. The journey from the studios to our house on the other side of London was the first time Maggie had seen sunlight in ten years. Heartbreaking! She kept poking her head out to look at us and then turn her face to the sun.

Maggie has a much happier life here at Casa Lyan. She’s the largest and oldest of our critters, as well as being the only girl alongside four boys and a non-binary creature (represent!). I have filled her tank with all sorts of fun stuff. She’s got toys, flowerpots, a beach house and even a castle made of toilet rolls. Climbing and coiling are important exercises for a snake, so we tried to provide adequate equipment for her. Her favourite toys are her plastic skull (the only toy she previously had) and a giant playstick. One of her favourite games is hiding in the playstick and peeking out. 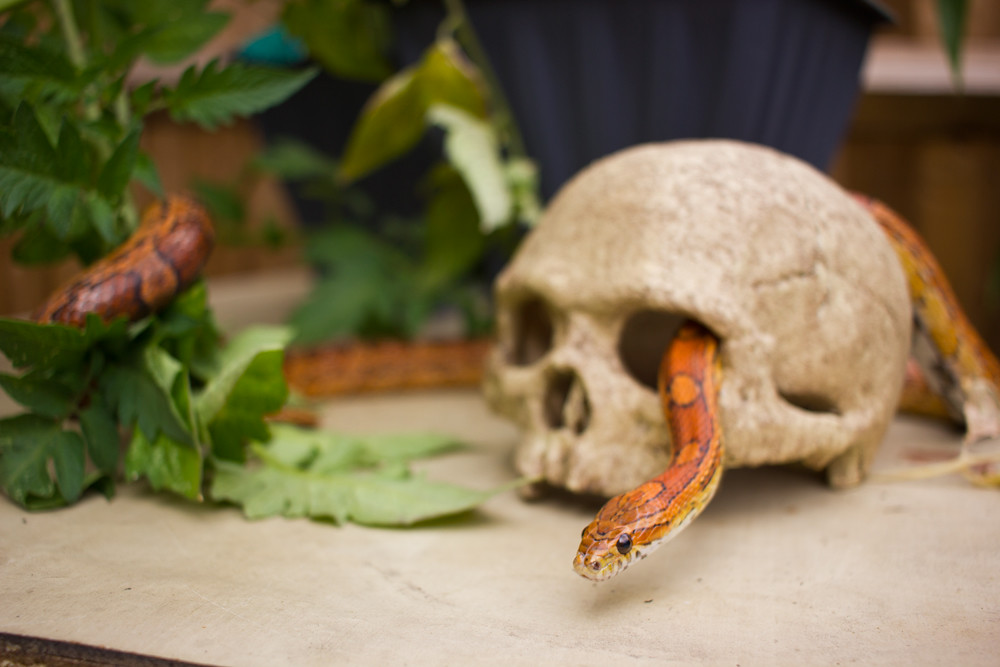 Maggie is a 16 year old corn snake and was born in captivity. Corn snakes are not native to the UK and it would be illegal to release her into the wild. She’s stuck with us! Mags has brown eyes and is the standard colour for corn snakes. As you can see it’s a kind of red brick pattern with checkerboard markings underneath. Basically a ginger. You can buy all sorts of weird colour morphs online but beware. Many are the result of a lot of dead regular colour baby snakes!

People’s main concerns seem to be that she will bite (only if you withhold food and tease her), she’s slimy (nope) or that she’s venomous (absolutely not). Maggie likes being handled, and especially has a thing for girls. I’m not sure if there is a reason for this. Snakes can sense body heat so maybe females literally are hotter? She has a particular attraction to bra straps and also loves people with long hair – or more specifically, getting tangled in it.

There’s three types of snake in the UK: grass snakes, smooth snakes, and adders. Adders are venomous, but there have been only three fatal attacks in the UK during the last ten years so don’t run for cover! All three species are protected by law and it’s illegal to injure, harm or capture them. If you spot one you should let your local wildlife trust know. Unfortunately loss of habitat is having a big impact on snakes; you can help by leaving a big pile of logs or leaves at the end of your garden. A happy home for a snake! 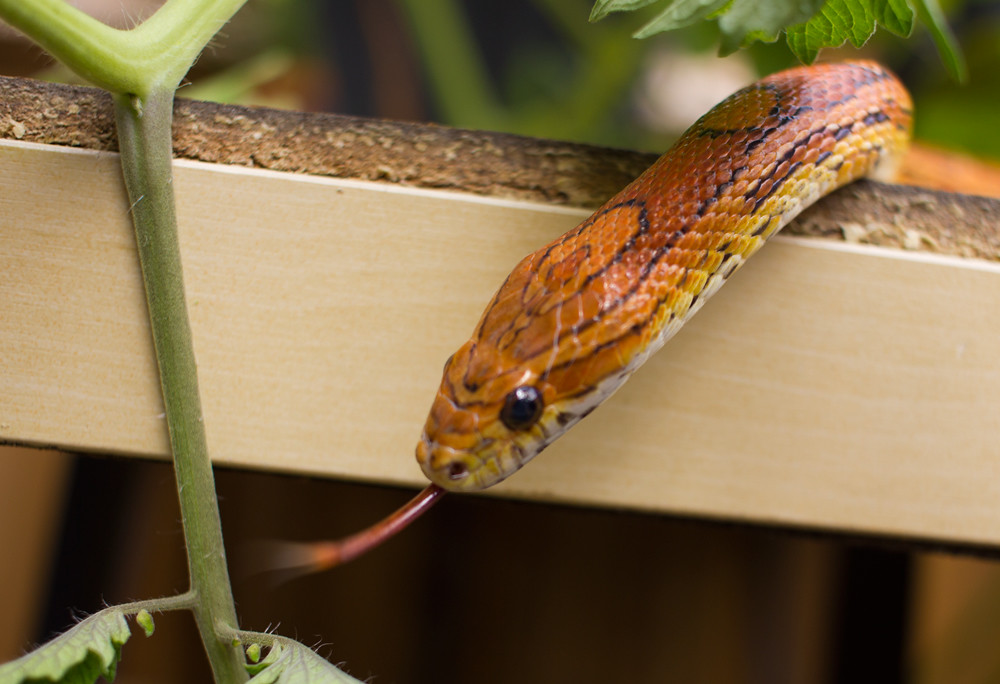 Snakes are not aggressive creatures, and like most wild animals will only attack a human if they feel particularly threatened. I actually think they’re quite playful, or at least Maggie is. Surprisingly they’re a lot easier to read than many other animals- for example, hamsters, fish and french bulldogs. Trust me, I’m serious! Snakes make it clear if they’re too hot/cold, angry, scared, hungry, in pain, tired or content. That’s quite a varied repertoire.

There’s a few thousand years of bad PR to undo but I’m taking a stab at it. You’ll find horror stories about people being attacked or poisoned by vengeful snakes, but you are over five thousand percent (!) more likely to get attacked by a dog. Snakes get a lot of negative press in the western world, whether it’s Medusa, Kaa, Slytherin or Taylor Swift 🐍.. And of course, who could forget that biblical cameo in the Garden of Eden?

Worldwide snakes are slightly better off; Hinduism actually has a whole day devoted to celebrating snakes. India is probably the most well known snake worshipping country today. It’s believed that snakes are a symbol of fertility and there are many temples devoted to snakes. Not bad for my homelands, hey? I guess between us, me and Maggie are flying the flag for snakekind over here in N19. 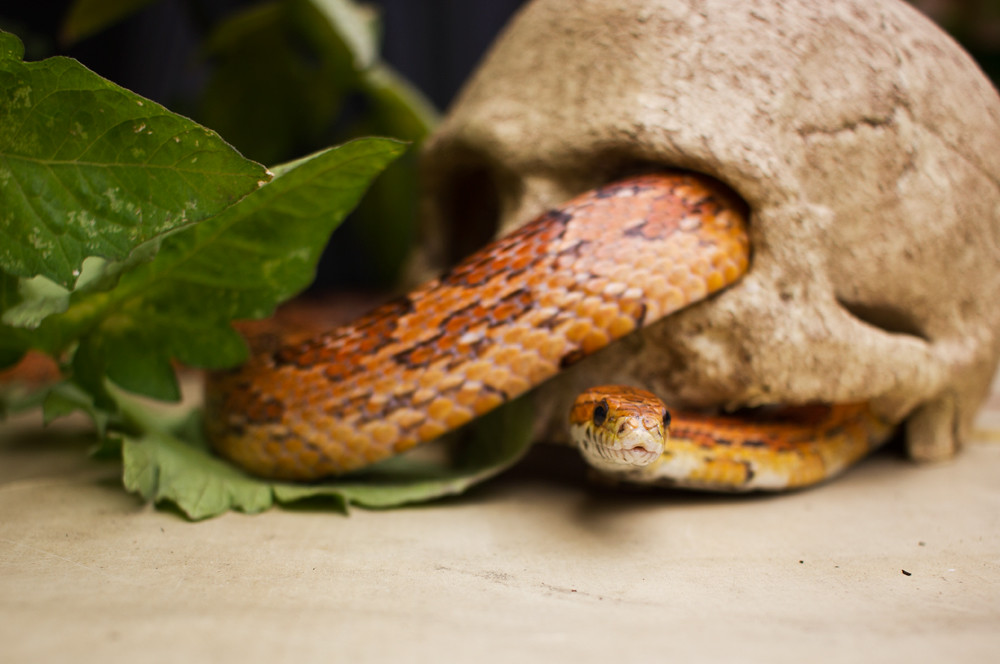 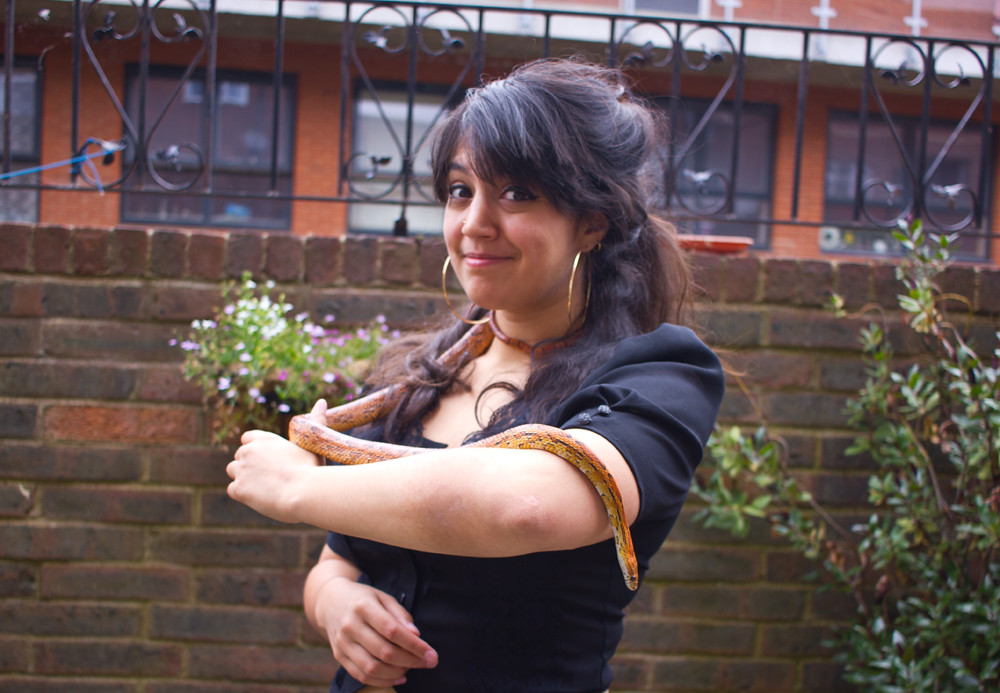 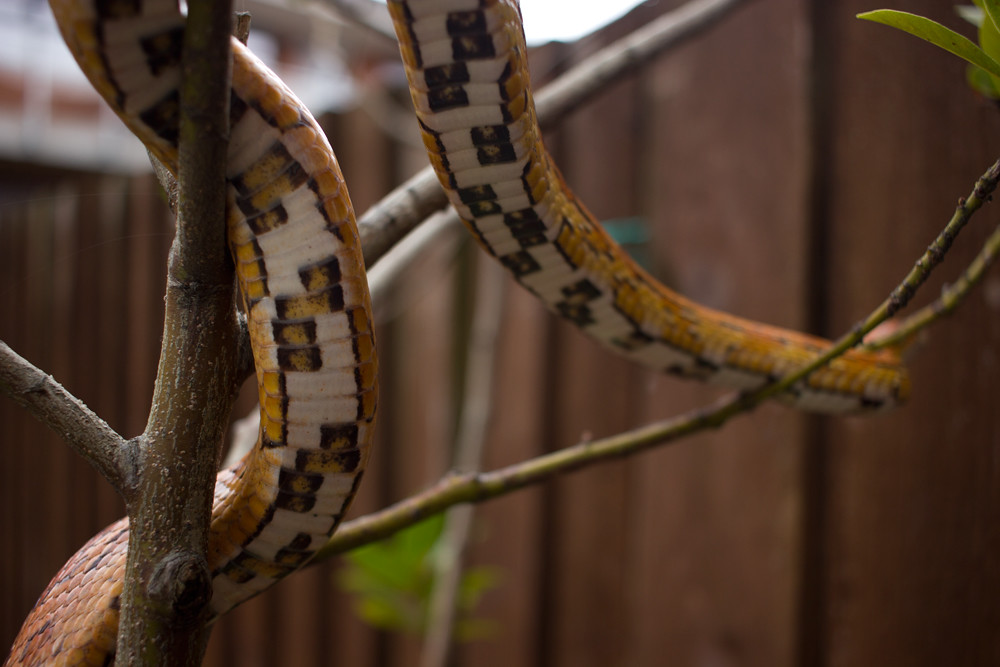 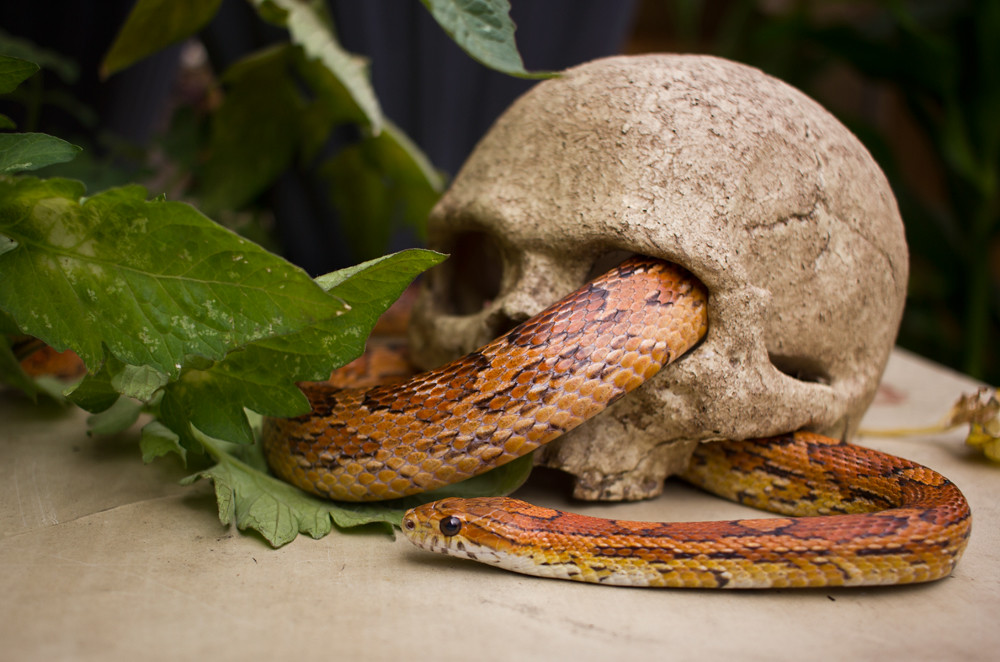 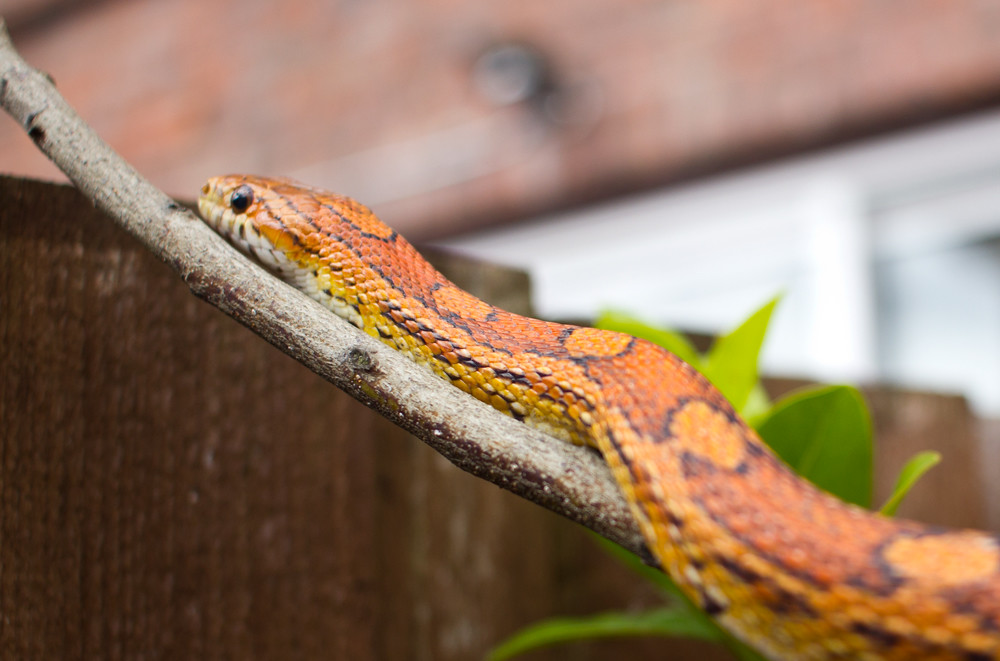 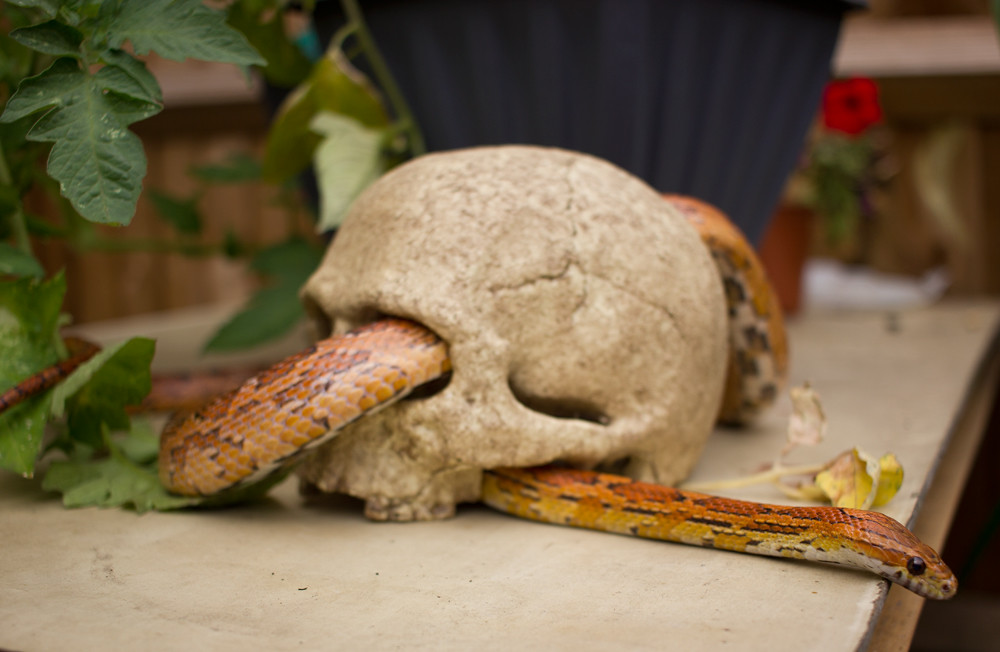 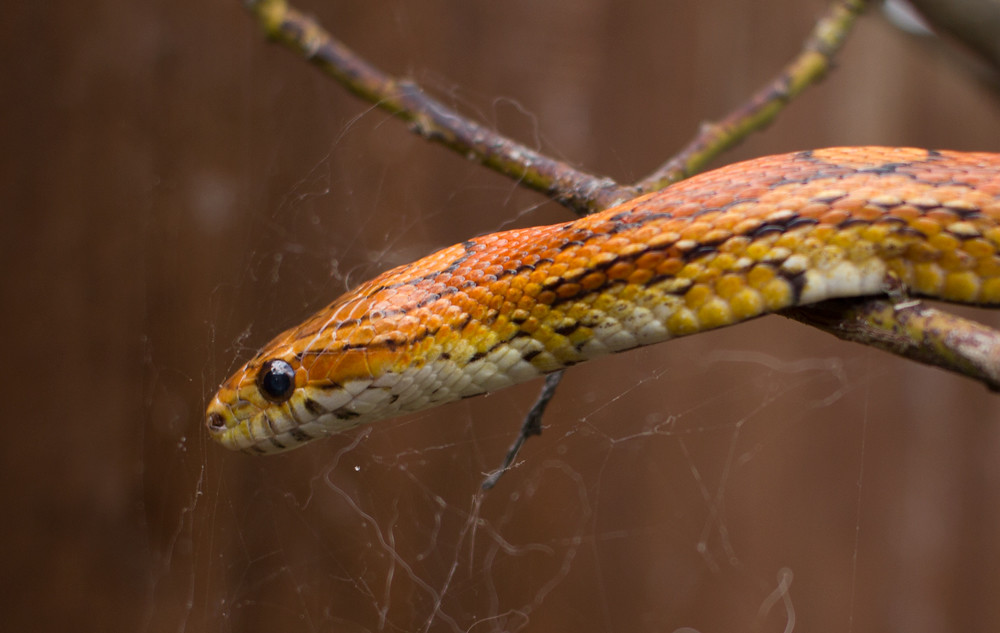 PREVIOUS POST
"A Trip To The Seaside"
NEXT POST
"Let’s Stop Eating Off The Vegan Menu"
4 comments so far.