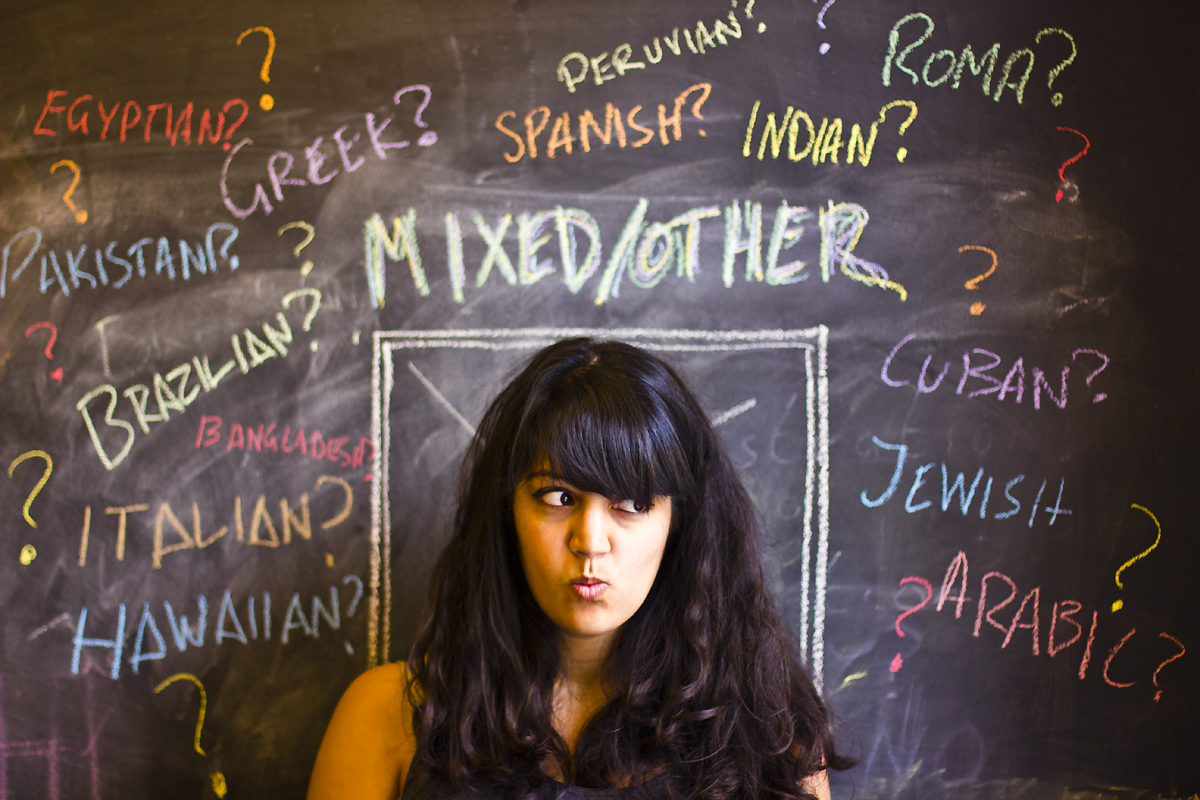 I received the above opening line on Tinder last week. I quickly posted it to Facebook with the comment “Just so we are all clear, “you don’t strike me as English” is not an acceptable chat-up line”. My initial reaction was shock and disbelief along with a weary resignation. Amongst the 60-odd likes on were a number of comments which were largely jokey. I can play along to a degree, but the thing is: I wasn’t joking. It’s not an acceptable line.

I’m mixed race. I was born in London. I have a non-Caucasian name. I have brown skin and thick dark brown hair. My name and my colouring, two aspects of myself which I have no control over and were mere circumstances at birth, have far too often become the sole distinguishing features that people latch on to. These features single me out as not being white. Though 13% of the UK and 40.2% of London are not white, being not white still means I am different.

I am reminded daily in the way people talk about me or to me and by the assumptions implicit in conversations. I’ve long been resigned to how things are, but the anger I feel about this is growing. I am made to feel strange and unusual; I am made to feel “other”. I am literally forced to identify myself as “other”, because I am “Mixed Other” on the drop down menu of racial backgrounds on HR forms and the national census.

I take the piss out of this a lot. I jokingly describe myself as being “foreign” or “ethnic” because the alternate option is to wait for that label to come from somewhere else, probably somewhere with fewer laughs. I take the piss, because otherwise I would be too angry to do anything. 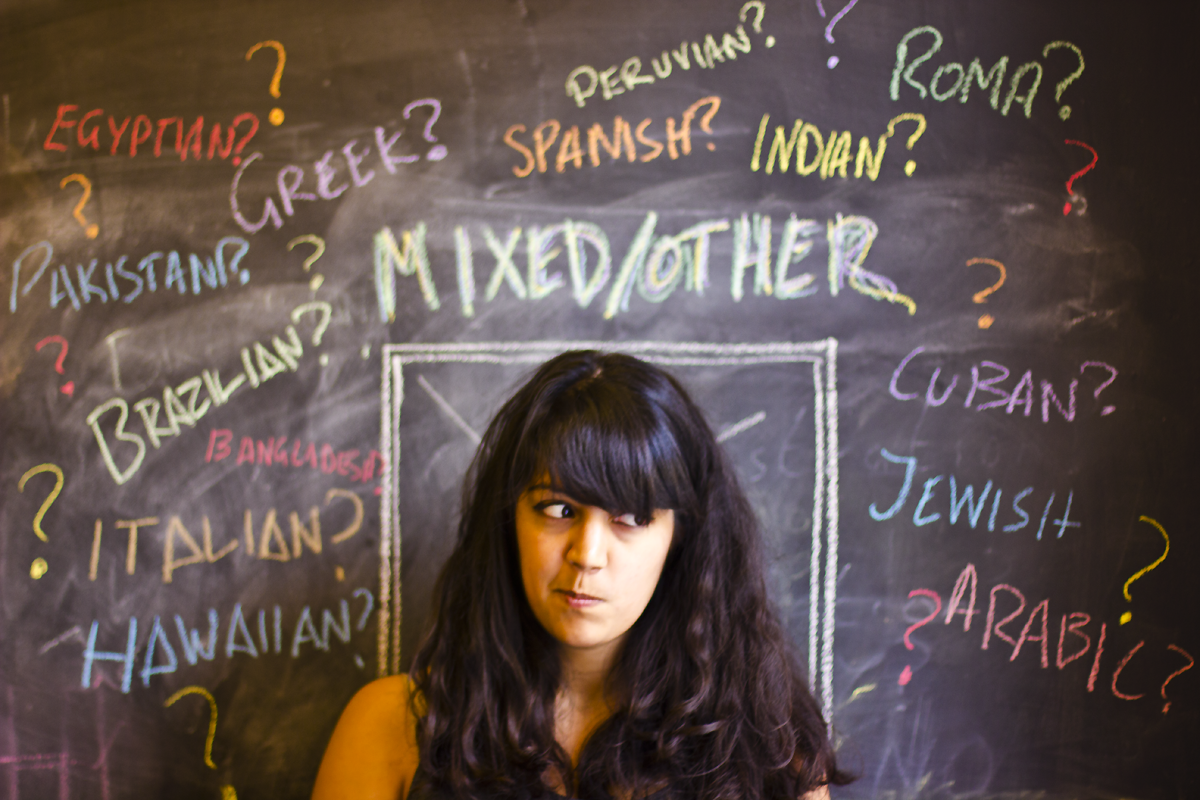 The older I get, the more exhausting it is to laugh this stuff off; casual racism, instant stereotypes, pre-assigned tropes. I am in disbelief that things don’t seem to change despite more people calling it out. I call it out every time whether it’s a friend, a colleague or somebody I’ve just met. The more I call it out, the more aware I become of the fact that these race-based assumptions are deeply ingrained into our society, so much so that people often aren’t aware they hold these assumptions. People deny that their remarks were meant to cause offence; I’m sure they weren’t, but it doesn’t change what’s been said and assumed. Nobody wants to think of themselves as racist.

The more I call it out, the more I’m told I’m making a big deal out of nothing. I’m tired of being told that if I want to take something intended innocently as a racist remark, then that is my issue to deal with and that the problem lies with me. It’s never the problem of the person who made the remark: they didn’t intend any offence and so do not accept offence caused. I’m fed up with being told that I’m trying to draw attention to myself, that I take things too seriously, that I should have picked a less visible career instead of placing myself on stages. I’m fed up with trying to patiently explain to everybody why their words might hurt. I’m tired of hearing that people’s other non-white friends have never called them out, so what’s my problem?

I’m not an angry person, and I tend to see humour in all situations, but not being white feels more and more like a daily slog I can’t turn off. I’m writing this post so that you see why it might get frustrating. You’re probably thinking, what kind of incidents is she referring to? What comments does she call out? How bad can it really be in 2015? Well, let me try to paint a picture. 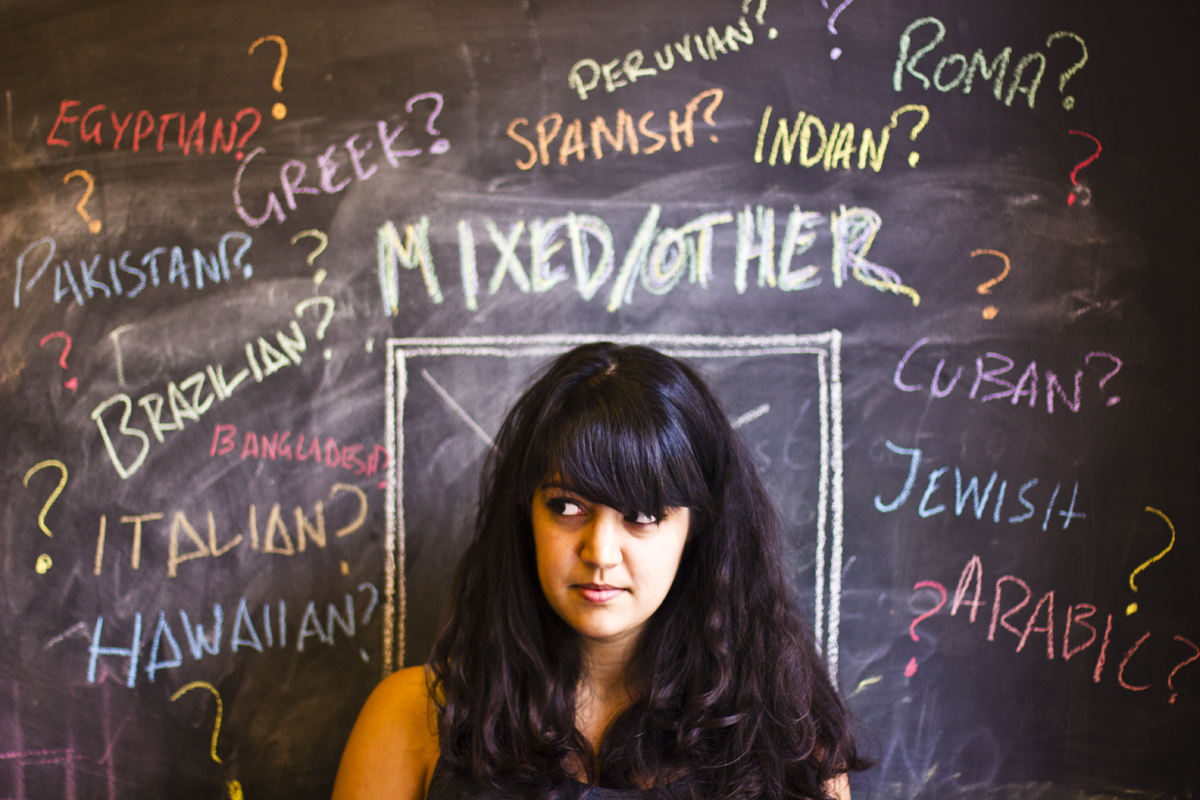 When participating on the panel at a Q and A session I noticed my name had been spelt as Lola on my name badge. Lola is not my name. On informing the event assistant she replied “Well it’s close, isn’t it? We’ll leave it at that as people know how to pronounce THAT name – we don’t want any embarrassing situations”.

At least 50% of the time after people find out I’m a musician they ask immediately if I play Indian music.

I have my teaching details listed on different websites. My profiles are exactly the same, except I created one using my mother’s anglican maiden name and one with my actual surname. The maiden name profile received 75% more interest in the first couple of months. The profile using my fathers surname received 5 separate requests asking if English is my first language and if I can speak enough English to teach, despite the fact the profile was written in English.

Being asked if my vocabulary is sufficient enough to teach Music at GCSE Level in 3 separate job interviews, despite my CV explaining that I am a British national, English is the only language I teach in and that I possess a Masters in Music from a UK institution.

Being described as “beautiful” or “pretty” is always followed by “in an exotic way” or “you look so tropical” or even “for/despite being brown”. Only twice has a person called me beautiful and just left it at that.

Related “compliments” include, “you could be an Arabian princess”, “do you ever wear one of those scarves? I think they’re sexy”, “can you do a belly dance?”, “you’re like a harem girl”.

Walking past a man wearing a UKIP rosette who shouted “we’ll be getting rid of you soon, love!” and spat on the pavement after me.

The recruitment agency who advised using a picture of me where I looked “brighter” as schools want to employ “a friendly face” – it was a black and white photo (making me look lighter-skinned) rather than the colour one I had provided. Everybody else on the books was white and had a colour photo.

Another man on a bus telling me to “fuck off back where you came from before you blow the bloody place up” before shouting at a fellow passenger “there’s a fucking terrorist on this bus!”.

Being turned down for a job interview at a school, phoning up to ask for feedback and then being greeted with laughter and “oh! we assumed you didn’t speak English very well” and then more laughter, as though this was hilarious.

About 3 days after our latest election result, two men on the street talking, first said “Cameron’ll send all that gross Asian scum home now” to which the second one replied “Yeah, except them, I like something tropical every now and then” whilst nodding at me.

After listing my role models as Kate Bush and Lindsay Cooper in an interview I was asked “do you have any role models like you? You know…” and then, whilst gesturing to my face “we wanted to play that whole thing up a bit more, you know, it’s an interesting angle.” I’m so happy I provided you with a ready-made interesting angle! God forbid you’d have to find the interest elsewhere, for example my career or business.

On arguing against peoples nationalities being listed after tragedies and fatalities abroad I was rebuffed with “You wouldn’t understand because you’re not a proper nationality.”

Being told by a gross man in a bar that “girls like me” make more money as lapdancers/pole dancers because we look less pasty under bright lights and (again) also look more “exotic”.

Aged 6, local press – “Can we have the little brown girl to sit near the front? It looks better.”

Aged 14, school press – “It needs to look more diverse – Laila, can you come and stand in the front?”, worth pointing out I was the only non-white girl in my year.

Using maps on my phone in Brighton to find a cafe, a guy came up and said “are you looking for the language school?”. I said no and asked if he knew where the cafe was, and he said “Oh! I didn’t realise you spoke English. I thought you were looking for the language school. You know, because of..” and then gestured at my face whilst laughing, as though this was a hilarious mix-up. 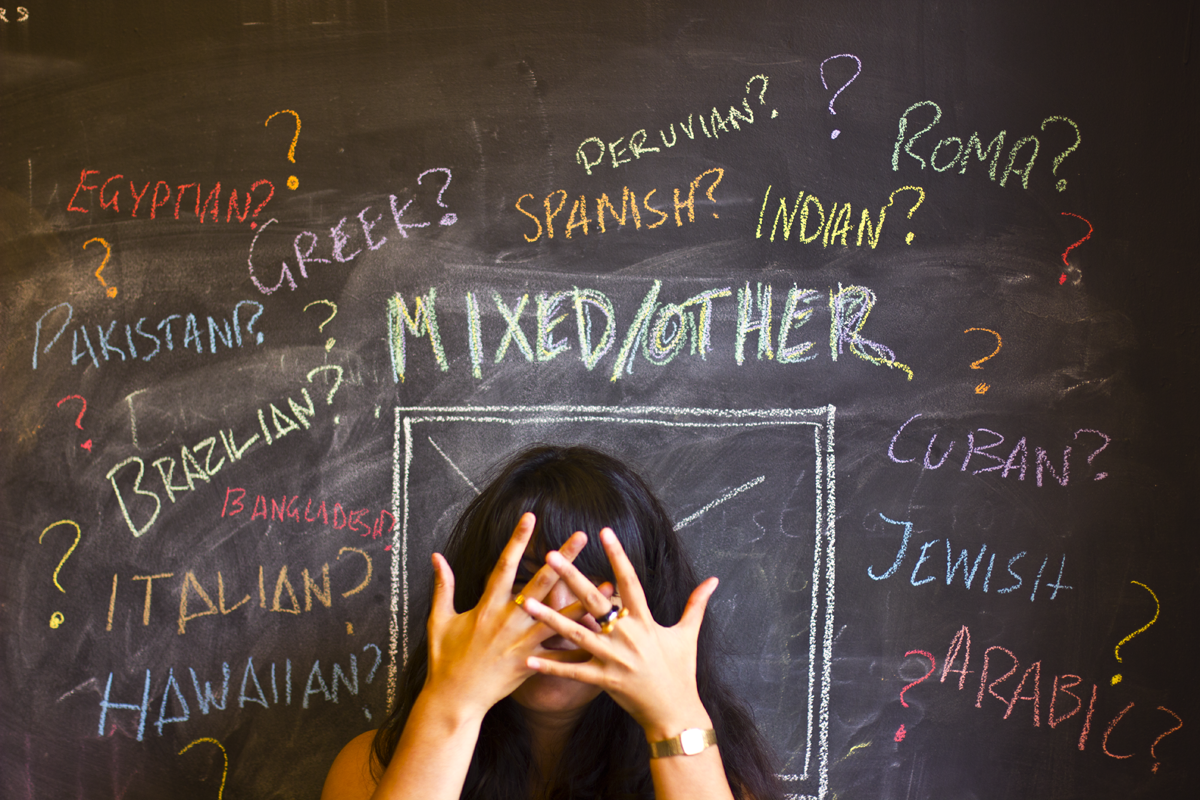 THINGS I HEAR ALL THE TIME:

“So where are you really from?”

“So where are your parents from?”

“When did you come to this country?”

“Do you feel part of British society then?”

“I just think brown girls are more interesting.” – most recently heard from somebody 5 months into a relationship.

“So you don’t really have a race? What kind of a person are you?”

“Do you still consider yourself a person even though you don’t have a country?”

“Are you vegetarian for religious reasons?” – a question never asked of my vegetarian white friends when we eat together.

“You wouldn’t say that if you had a country of your own.”

“You’re so dark and mysterious, it’s like you’re a stranger from another land.”

“I’ve always liked exotic girls” – again most recently heard from somebody 6 months into a relationship.

“It’s like, when you go out with somebody from another country it makes your whole life feel more tropical, you get that tropical holiday feeling. You’re basically like going on a holiday.” 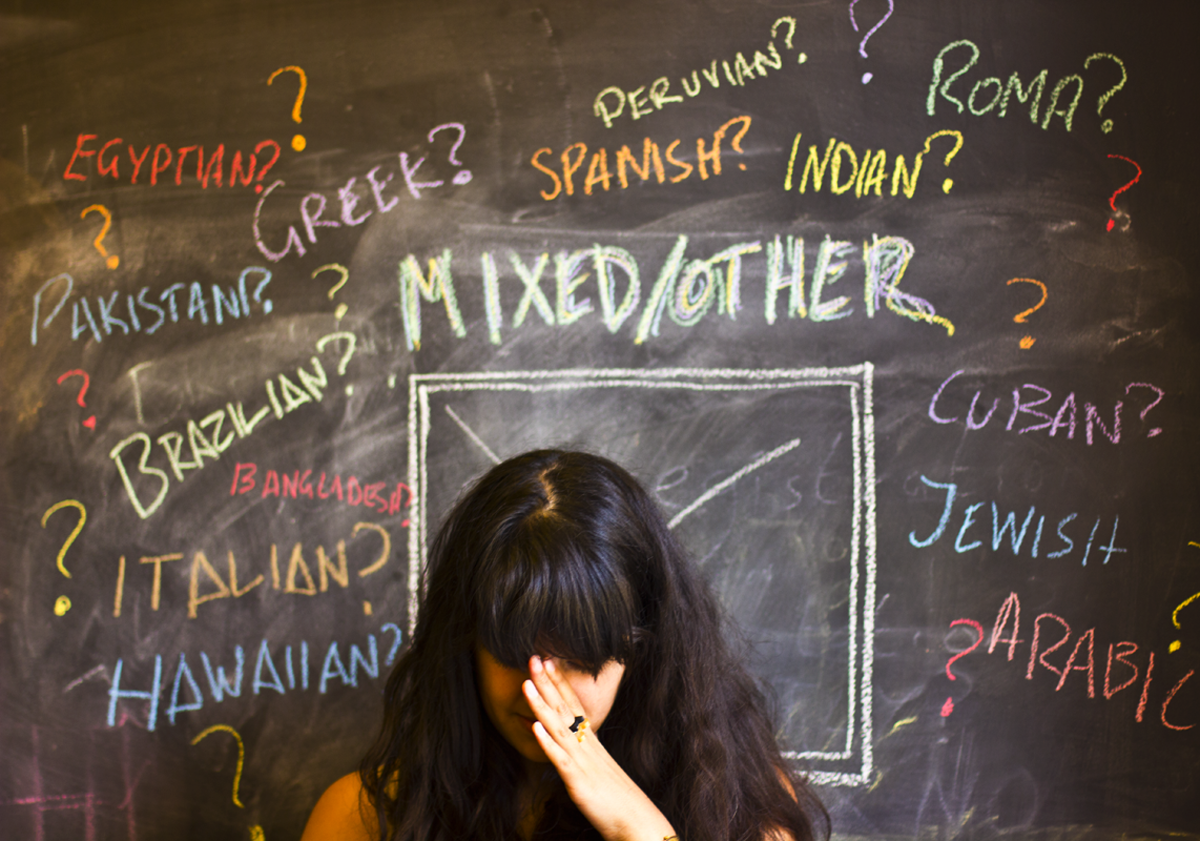 One or two of these incidents could be brushed off as an unfortunate confusion, but when it happens week in and week out I become jaded. I can’t comment for everybody that’s not white, and much of the above is coupled with being a girl or being mixed race, two things which I could post about separately. I do seem to get more comments than a lot of my non-white friends, so maybe I just come across like a particularly antagonistic member of society who needs taking down a peg. But from my perspective it just seems like there is a huge amount of racism that I have to navigate on a daily basis, and at no juncture do I have the luxury of going about my life without my heritage challenged and called into question.

A lot of the assumptions can easily be avoided by re-wording questions. “How long have you lived in this area?” will get the same information as “When did you come to this country?” without implying that I’ve moved here from somewhere else. “What kind of musician are you?” lets me explain myself as opposed to guessing with “Oh, Indian music? Like in Bollywood?”, and if you’re genuinely interested, why not put “Why don’t you eat meat?” to everybody in the group rather than singling me out and assuming I’m religious? It’s simple wording and phrasing, but it’s wording a lot of people have probably never had to think about, because they have never been on the receiving end of it of that particular line of questioning.

From now on I’m going to broadcast every time I encounter a racist comment or scenario – call it out with me if you like on twitter (@lailawoozeer). I hope people are aware of it, and I hope at some point, people will call themselves out on what they say, and do. Maybe eventually they’ll have to start calling themselves out not just before they say or do anything but when they even start to think that way. But until then, I’ll keep calling it out.

Diversity at Edinburgh Fringe 2018: Fringe of…

I’m Writing A Book: Not Quite White